This online course will look at Frank Lloyd Wright in the context of 20th century culture, and examine parallels between his work and that of other 20th century figures. Architecture is the crystallization of the spirit of its age, and this certainly applies to the architecture of Frank Lloyd Wright (1867 – 1959). Wright pioneered Modern Architecture in response to industrialization, new materials, and changes in society. Then he created a new home for the 20th century in response to the decentering brought about by the end of perspective painting, the end of absolute space and time in physics, and end of a privileged position for humans in science and society. And Wright created a new notion of who we can be as human beings, bringing together the individual of the West, and the integration in the flow of nature of the East. 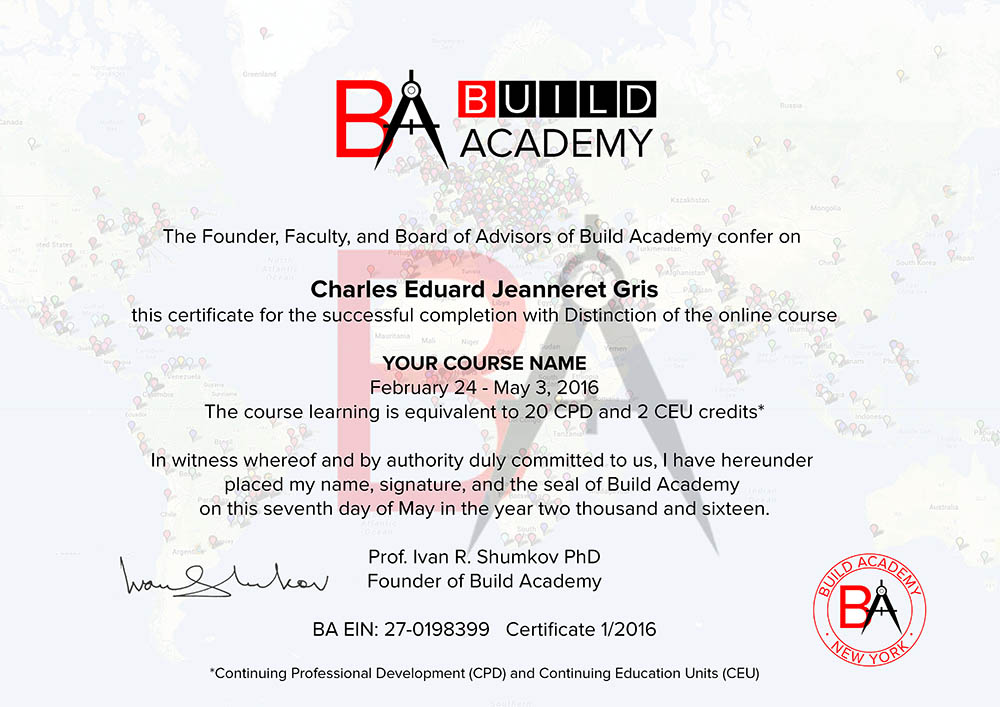 Build Academy offers basic certificates for the successful completion of the course. Each certificate is A3 size (42×29,7cm) and has a unique number with electronic signature to guarantee that it can not be copied nor falsified. The criteria for obtaining the course certificate is: Participation in the final exam with at least 50% of the score points. You will receive the certificate by email withing 5 business days. 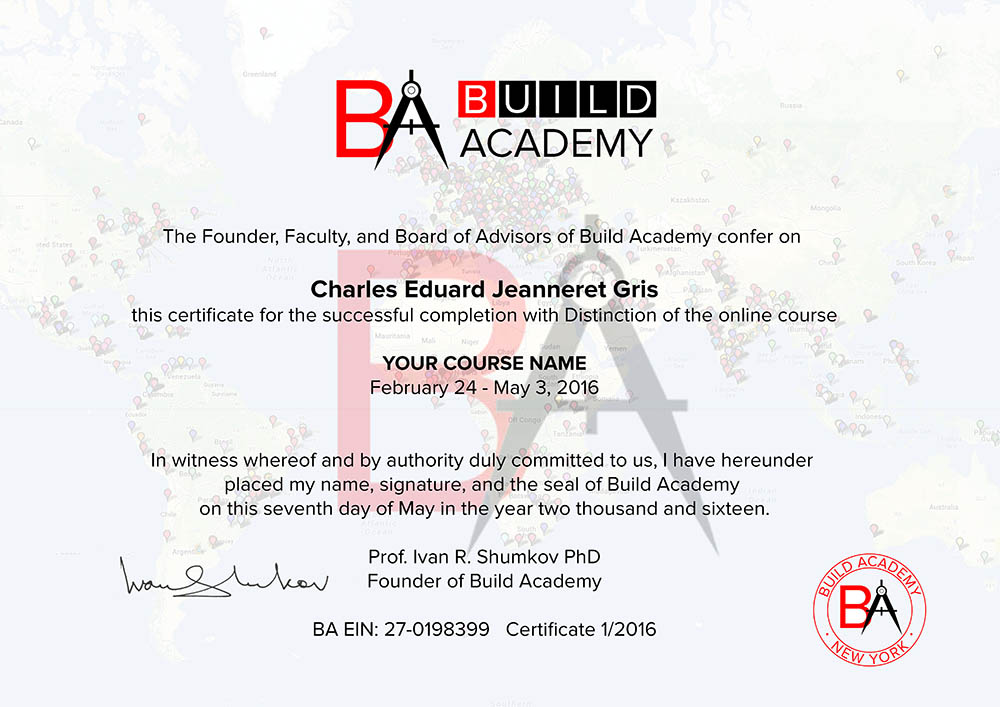 Build Academy offers official CPD and CEU certificates for the successful completion of the course. Each certificate is A3 size (42×29,7cm) and has a unique number with electronic signature to guarantee that it can not be copied nor falsified. The criteria for obtaining the course certificate is: Participation in the final exam with at least 50% of the score points. Students with a score above 80% will be awarded a Distinction.

The CPD and CEU international credits are an indication of the hours of learning in your online course. It is up to your school, employer and professional organization to decide if they would recognize your learning experience. Build Academy can provide you with a reference letter and the course syllabus if you want to prove your learning experience, or apply for jobs and schools.

Before Wright, most architecture was based on the past, as we see, for example in the Beaux Arts that referred back to ancient Rome. After Wright, architecture, including that of the leading European Modern Architects, was based on an honest expression of the functions, spaces, materials, and structure of a building. Wright worked in the Midwestern United States, a region that prided itself on being remote Europe, where he developed a uniquely American, modern, and democratic architecture.

We begin with a brief overview of Wright’s work, a biographical sketch, and a look at the architecture at the time he began his career. Then we go into some depth on each of Wright’s major works: his Prairie Style houses, Fallingwater, Johnson Wax, the Guggenheim Museum, and more.

But we are not done. Next we will look at the culture of decentering that defined the 20th century and Wright’s role in its unfolding. And finally we will look at what Wright meant by Organic Architecture, and how it unifies the cultures of the West and the East and creates the potential for a new way of being human.

Your main obligation is to watch, absorb, and enjoy the lectures. Reading and the viewing of online videos is at a minimum. Watch the lectures and enjoy the images and descriptions of some of the most important buildings of the 20th century.

You will be assigned discussion groups on suggested topics, and there will be a peer graded final exam.

Those completing the course requirements, including viewing all lectures, participation in the discussion groups, taking quizzes, and passing the final exam, will be offered a Certificate from Open Online Academy.

The recommended textbook for the course is “Frank Lloyd Wright,” by Robert McCarter. However, this is not required.

John Lobell is a professor of architecture at Pratt Institute in Brooklyn, New York, where he teaches courses in the history and theory of architecture, including a course on Frank Lloyd Wright.

He also teaches courses on the cultural and social impact of new technologies, addressing how they change our consciousness, which in turn leads to paradigm shifts that affect every aspect of our lives.

Lobell received his architecture degrees from the University of Pennsylvania. He has lectured and addressed conferences around the world, and is the author numerous articles and of several books, including Between Silence and Light: Spirit in the Architecture of Louis I. Kahn.

Do I need to buy a textbook?

PDFs related to the lectures will be posted online for students to download so that they can review the images and text in the lectures.